Finra Is Cracking Down on 'High-Risk' Brokers 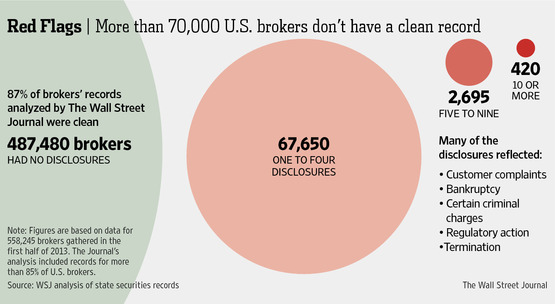 Under pressure from Washington to crack down on rogue stockbrokers, the Financial Industry Regulatory Authority is highlighting a fast-track program it began earlier this year to go after what it calls “high-risk brokers.”

The results: Forty-two of the most troubled brokers were targeted for “expedited investigation,” and 16 of them were thrown out of the securities industry, Finra Chairman and Chief Executive Richard Ketchum wrote in a Nov. 13 letter to Sen. Edward Markey (D., Mass.).

The letter includes other previously undisclosed details of what Mr. Ketchum described as increasing efforts by Wall Street’s self-regulator to scrutinize repeat offenders among the 634,955 brokers licensed by Finra.

According to an analysis by the Journal of state securities records, more than 5,000 brokers licensed to sell securities earlier this year had worked at a firm that was expelled by Finra from 2005 to 2012.

Mr. Ketchum said Finra takes “our mission of investor protection seriously,” adding that officials plan to expand the high-risk brokers enforcement program next year. The expansion will include the creation of a “dedicated…team to prosecute such cases.”

In a statement Thursday, Mr. Markey said he welcomed these “important initial steps” toward what he called the “urgent need…for much more vigorous enforcement of rogue brokers.”

The high-risk brokers program was launched in February, and Mr. Ketchum wrote that it shows that Finra officials realize “the potential harm individual brokers can cause investors and the need to confront them more quickly.”

He didn’t disclose the exact procedures used by Finra’s Office of Fraud Detection and Market Intelligence to zero in on suspicious brokers. A Finra spokeswoman said the criteria are “regulatory information that we shouldn’t disclose.”

Finra hasn’t publicly released the names of the 16 brokers barred from the industry under the new program but will “at some point in the future,” she said.

Some outsiders said the numbers so far seem small. Philip Aidikoff, a Beverly Hills, Calif., lawyer who represents investors in claims against brokerage firms, said the total of 42 people targeted by the high-risk brokers program since February appears “incredibly” low compared with the scale of problems he believes exist in the securities industry.

Arkansas Securities Commissioner Heath Abshure said it is hard to judge the results until Finra discloses more specifics about its enforcement procedures. The regulator is “trying to tout how effectively it regulates the industry by saying: ‘We’ve got this fast-track program, but we’re not going to tell you anything about it.'”

Overall, Finra booted 1,342 brokers from the industry from January 2011 through September, Mr. Ketchum said. Finra’s spokeswoman added: “No regulator gets more brokers out of the industry.”

Finra’s overseer, the Securities and Exchange Commission, also can expel bad brokers. A new task force will help the SEC improve its coordination with “other regulators across the country to sanction firms that are not appropriately supervising rogue brokers,” SEC co-enforcement chief Andrew Ceresney said in a statement Thursday.

In addition to the high-risk brokers enforcement system, Finra officials use a computer-powered risk-analysis “broker migration model” to track people who worked at expelled firms, according to Mr. Ketchum. A separate tool called the “problem broker model” zooms in on brokers who have been the target of multiple complaints or other problems disclosed in their regulatory filings.

Such red flags show up in filings of about one of every eight brokers in the U.S., according to the Journal’s analysis. More than 3,000 brokers have at least five disclosures, while 46 have more than 20. The Journal’s analysis is based on state securities records for more than 85% of all brokers.

Finra also didn’t identify the 42 individuals targeted since February under the high-risk brokers program. The list doesn’t include broker Bambi Holzer of Beverly Hills, because she was already under scrutiny by enforcement officials, the Finra spokeswoman said.

According to the Journal’s analysis, Ms. Holzer ranks among the 10 brokers with the highest number of customer complaints. Since 1990, she has had 64 customer complaints filed against her. Finra suspended her in September and is seeking to bar her for allegedly selling unsuitable products and, Finra says, making false statements to regulators.

In an email Thursday, Ms. Holzer said she “always represented my clients with integrity and professionalism and deeply regret the circumstances that caused these events.” She blamed most of the complaints on changes made to an investment product after she sold it to her customers, adding that she urged them to “fight the change.”

Ms. Holzer said she has “surrendered my Finra license.”